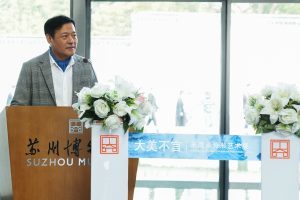 Life is like a journey. Your destiny is revealed in your history.

Time passes and everything is fading. Some has gone forever, some will linger in hearts and come to rebirth in the form of art.

Zhu Yuze is a modern artist deeply influenced by world culture. His art is pure with no self-interests. His art is simple and formed by color with less focus on traditional skills. He lives in his own spiritual world, talks to Zhuang Zi and God, totally in his own mind territory with no personal secularemotions. Self-complacence is in his flashing out inspirationsand leads audiences into his art. The nothingandeverything is in his art. His nothing is formed due to quietnessand infinity, while his everything is formed due to all-inclusiveness and abundance. Beauty is to find out infinity from limitedness.

Zhu Yuze’s new ink works achieve culturalcompatibility by his color compositionand ink blending. The work is combined with mists of Chinesepainting and sense of flowing from the western oil painting. His work has spirit of natural beauty, simple but complicated, elegant but abundant, goes beyond interests as a symbol of freedom. His art focuses on heart more than physical body, mentality more than materially, presents purificationto appreciationof socialfeelings, and pursuit of harmony between life freedom and universal spirit by following his own naturalcharacter.